Haluga is a monster student who attended Monster Academy.

Haluga is a blue monster with black hair, yellow Ickis-like eyes, and feet who has the power to turn himself inside out. In an unknown episode of the show, we saw something like a Haluga in Monster Academy

Something that looks like Haluga was seen in an unknown episode of the show but was never mentioned by name. His only appearance was in the "Aaahh!!! Real Monsters: Dare To Scare" Toyline.

The character was created by toy designer Mel Birnkrant, who had a toyline including some of the random monsters besides The four main monsters. Though he looked different before the Aaahh!!! Toyline was released in stores and Birnkrant sold his designs to Mattel and Klasky-Csupo/Nickelodeon 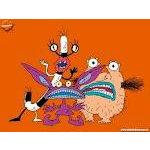