The Aaahh!!! Real Monsters Wiki
Register
Don't have an account?
Sign In
Advertisement
in: Characters, Minor Characters, Males,
and 4 more

In several episodes of Aaahh!!! Real Monsters, humans make appearances, usually scared by either Ickis, Oblina, Krumm and many other monsters.

The following human characters are unnamed and/or only have minor appearances in the episodes in which they appear.

The following human characters appear in the credits of an episode, but have not been linked to a specific character. 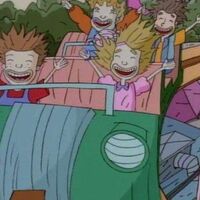