The Skrink is a bird/pig/elephant-like monster student at The Monster Academy who specializes in making spooky sounds. The Skrink is shown to be profoundly clumsy, but friendly and upbeat.

The Skrink is a small yellow monster with a round body, bulbous eyes, orange hair, and a trunk-like nose. The Skrink has two arms and pig-like legs with four digits per hand and two digits per foot. He also has a number of retractable fleshy tubes that hang under his arms which he uses to make various sound effects.

Things That Go Bump: The Skrink is a new student who recently moved to The Monster Academy's sector. He is teamed for a "pair scare" with Ickis, who assumes The Skrink is incapable and treats him as such. Eventually The Skrink saves the day with his sound creation abilities. 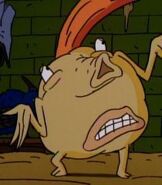