The Aaahh!!! Real Monsters Wiki
Register
Don't have an account?
Sign In
Advertisement
in: Characters, Major Characters, Antagonists,
and 6 more

The Snorch is the Gromble's minion, the academy disciplinarian and the tertiary antagonist in the show.

He is a huge and terrifying beast that keeps even the scariest monsters on their best behavior at the Monster Academy. His constant companion and mouthpiece is the much less intimidating Zimbo, who flies around in the sewers and reports any trouble he sees directly to anyone in charge. Some of the punishments that The Snorch has handed out include square dancing and listening to human music, mainly soprano (opera).

The Snorch is of a mustardy-yellow color, with two red eyes, long floppy ears and two large protruding tusks/fangs. He wears an olive green one piece outfit with large dark purple spots.

He is often seen with Zimbo on his head or buzzing nearby. Zimbo acts as the Snorch's assistant and translator, as no one else seems to be able to understand what the Snorch is saying.

While the Snorch appears as the local dimwitted school bully, in "I Heard the Snorch Call My Name", he begins to drift away from Zimbo a bit. When he hears Oblina complain about Krumm and Ickis' intelligence, he desires to speak for himself to befriend her. When asked by Zimbo why he wanted to befriend her, he stated "intellectual stimulation".

After volunteering for a voicebox, Snorch shows his philosophical side at class. When asked what a great monster philospher meant by "To err is human, to scare divine". He states "The soul and very essence of a monster is a scare. It is our history! Nay, even more ... our identity! Take my life as a tragic example. It is a life wasted, for my scares have been seldom and few ...". He shows that it is a monster's responsibility not to cause harm to humans, no matter what the tempations may be

The Snorch has appeared in many episodes of Aaahh!!! Real Monsters. His first appearance was in The Switching Hour. 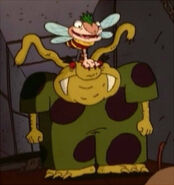 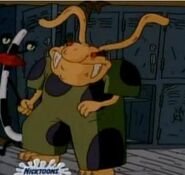