Xander Berkley
Urbab is a Monster student at The Monster Academy. He has strong morals for a monster, as seen in Monsters Are Real when he insisted on paying for each paper instead of taking them all at once, stating "That would be wrong." Urbab is often seen in the company of Kriggle, suggesting that the two of them may be close friends.

Urbab is brown with a long, rounded snout, large ears, pointy fangs, and yellow eyes. He has two arms and two legs, each with two digits (occasionally shown with three toes). Arguably, Urbab bears a resemblance to a bat, but has greater characteristics from a rabbit than Ickis does.

Monsters Are Real: Urbab is among the monsters helping Ickis retrieve the newspapers.

Slumber Scare: Urbab is one of "the guys" who make a night of bugging "the girls."

Beast With Four Eyes: Urbab is one of the monsters laughing at Krumm because of his glasses. 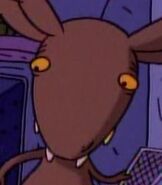