Watch the Watch is an episode of Aaahh!!! Real Monsters from season 4.

A routine scare end with Ickis hypnotized into believing he is a Texas human.

At the Emperor's Casino, Oblina and Krumm scare away humans and attempt to get back to class afterward, only to discover that Ickis is missing. As they search for him, Ickis is seen in the back room of a showroom attempting to scare a hypnotist. During the hypnotist's show, a Car Salesman named Eustace P. Tudwell volunteers to be the hypnotist's subject. Ickis, nervous of the prolific number of humans, counts to ten and attempts to complete his task. But as Eustace is hypnotized, so is Ickis, and the hypnotist hypnotizes Eustace into believing that he's a chicken, elephant, and a bear. When the hypnotist finally transforms Eustace back into his human form, Ickis now begins to acts as the Car Salesman. The hypnotist then hypnotizes Eustace into a monster, prompting Ickis to trigger in his scare mode, scaring away everyone out of the showroom. Ickis exits the showroom and runs into Oblina and Krumm, who tell him that they are going to be late for class.

As The Monsters make their way back home, Ickis is upset that his friends were not appreciated of his scare and accuses them of being jealous. Oblina responds by saying "You act as if no one else in the whole world has scared a human." After the word "human," Ickis transforms back to a car salesman and starts annoying Krumm and Oblina. When Oblina says "You are becoming a very annoying monster," Ickis is transformed back to his old personality. When Krumm and Oblina admonish Ickis for his behavior, Ickis, showing no memory of his hypnotism, is confused as to what he has done.

At the Monster Academy, The Gromble sends Ickis to the viewfinder, and as Ickis makes it there, Gromble says "And I pray, for your sake, that this time, you managed to scare more than just one, pitiful human," causing Ickis to transform into a car salesman once again. He hops off the viewfinder and tells crass jokes about Gromble. So the impatient headmaster sends the young, hypnotized imp to the doctor.

At the doctor, Oblina tells the doctor that Ickis has been acting strange lately, adding the sentence "not at all like a normal monster," which causes Ickis to transform back to his old personality. As The Monsters are order to leave, Oblina says "Sometimes that doctor is so stubborn I think he's part human," and Ickis transform back into a car salesman yet again. He runs out of the sewers and into the city streets, where he inadvertently scares away the humans when talking to them. Oblina and Krumm catch up to the hypnotized monster and tie him up to the dorm room.

At the dorm room, Krumm tells Oblina that Ickis hasn't been himself since The Monsters exited the Emperor's Casino, giving Oblina an idea to return to the casino while Krumm watches Ickis. Krumm is confused of Ickis' behavior and tells him that he used to be a chicken, transforming the monster in chicken form. Meanwhile, Oblina returns to the casino and comes across the Grand Showroom, where the hypnotist is confronted by a woman with Eustace still hypnotized as a monster. When the woman tells the hypnotist that Eustace has been acting like a monster ever since his hypnotism, Oblina overhears this and hides inside the car salesman's hat. When Eustace's hat is placed back on his head, the hypnotist hypnotizes the car salesman back into his human form and tells him that he is not a monster. Oblina then emerges out of the hat, steals the hypnotizing watch, and pulls out her internal organs, scaring away everyone in the showroom. Eustace is still acting like a monster and Oblina exits the casino via toilet.

Oblina returns to the dorm room to find Krumm hypnotizing Ickis into various of animals. Then Oblina uses the watch and hypnotizes Ickis back into himself again. She then hugs him very tightly, delighted to have him back. However, Krumm has been watching the watch as well and is now behaving like Ickis. So Oblina grabs the watch and she and Ickis chase after Krumm through the dump. 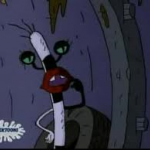