Zimbo is The Snorch's partner. He is the only monster who can understand the Snorch's words. He looks like a bee and can fly. Zimbo doesn't treat any of the students at the Monster Academy nicely, but he is nice to Gromble (the teacher). He often spreads rumors, showing he's more of a trouble maker than a helper. He may even be more of a bully than others see the Snorch as, as he takes joy in seeing others in torment. In the episode I Heard the Snorch Call My Name, he grew very jealous when Snorch wanted to befriend Oblina and took great joy at the idea that without the voice box, Oblina wouldn't be his friend. Zimbo is voiced by the great voice actor, Tim Curry.

Zimbo is a tan color. He has brown stripes and one leg. Zimbo's eyes are white with black pupils. He has some teeth and a pink tongue. His hair is green. Zimbo has a large nose and four wings.

Zimbo has appeared in many episodes of "Aaahh!!! Real Monsters". His biggest role was in Side by Side, when he was paired up with Ickis to scare people. 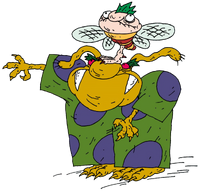 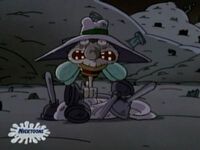